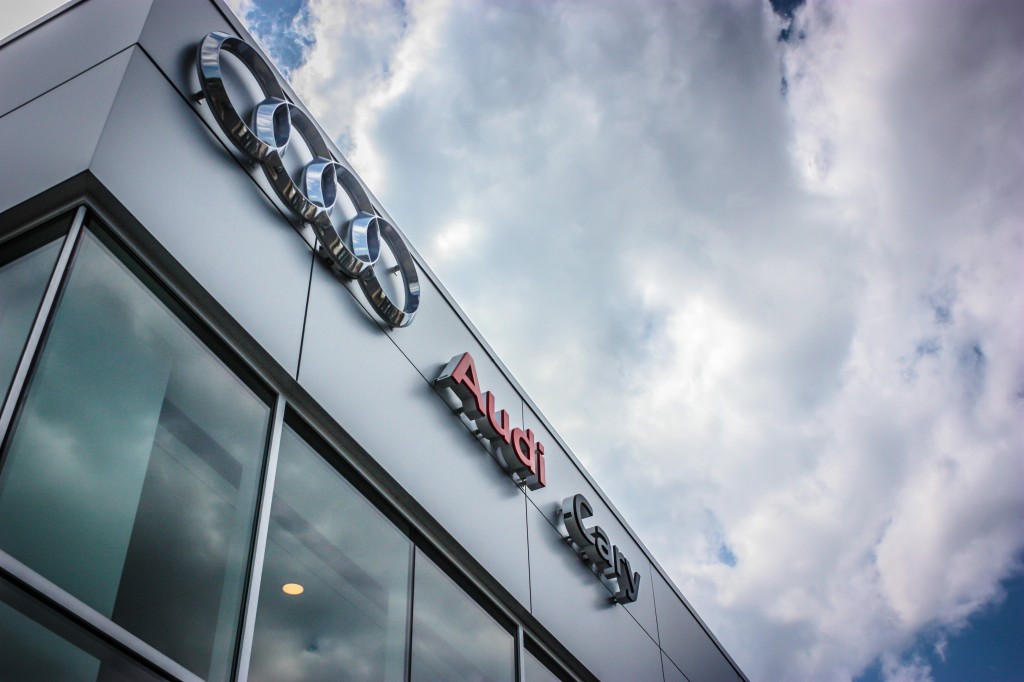 The Who, the What, and the Where

Those are the three most pertinent elements for a guaranteed enjoyable test drive. Surrounding the Auto Park is a veritable track that encompasses a variety of roads to ensure consumers can test a vehicle’s capabilities. From snaking side streets to bustling Highway 1, the only missing element is the opportunity for off-roading, which the 2015 Audi Q3 would easily manage. It’s more than an SUV; no competitor produces a model that comes equipped with the rugged capabilities of the Q3, refinement that luxury buyers expect, and incredible on-road performance (which made Audi famous – quattro).

The 2015 Audi Q3 that I drove managed to show me nearly everything it could do right in Cary, North Carolina.

Crisp and Clean – Oh, So Audi

The entirety of the Q3’s exterior has such precise curvature and lines, a masterpiece meticulously crafted by modern-day artists. It takes ample imagination and prodigious understanding of aerodynamics to discover how to ideally commingle style and function. Audi, with its Q3, once again demonstrated the refined mastery of such talents. This vehicle’s architecture possesses a smooth flow that eyes eagerly consume.

At its front, the 2015 Audi Q3 owns the same angular grille bordered by lean headlights that have become the standard face of this lineup. Ample front air dams provide further contrast with the body – jet black materials portioned into a chic slate grey – and look as if they were natural extensions of the grille. The robust face of the Q3 is anchored by the iconic four rings.

A Q3 is the type of vehicle that you need to stop and admire; consider it a refreshing affirmation of how Audi became a premier luxury brand. I did just that. I stopped and looked it over as Johnnie explained the benefits of an Audi during a concise, yet detailed, walk-around. The character and belt lines, smooth rounding along the roof, and the natural forward lean that denotes power comprise a holistically pleasing aesthetic.

Overall, the exterior has a crisp design. It’s clean. Symmetry and engineering based on schemes seen in nature (e.g. the right curves and angles; the robust snout; broad shoulders) afford Audi vehicles an arresting quality and unforgiving charm. From the Q5, the Q3 borrows much of its DNA, but there’s nothing wrong with uniformity among specimens of such precision.

A Surgical Approach to Visual Accomplishment

The interior of the 2015 Audi Q3 is surgical, mirroring the exactness employed for the lines and angles of its outer shell. All controls and displays have been deliberately set for optimizing an intuitive design; furthermore, as the bijou sibling of Audi’s Q5, the Q3’s interior cleverly places the rising display in the dash, pushes back the control panel, and sinks the gear shift just a bit – everything’s easily within reach, and these slight modifications yield an airy cabin.

One of the things that I rather enjoyed about the Q3’s technology package is that it ideally marries the familiar and foreign. While other automakers installs eyesore LCD displays with buried tiers of menus and content, Audi takes an approach that possesses a classic appeal without feeling dated. Occupants have clusters with dials and buttons to control some of the primary functions, such as climate control and the AM/FM radio. The LCD display is reserved for more complex content like navigation, phone syncing, and trip analyses.

In terms of aesthetics, the Q3 is a visual accomplishment. Aluminum inlays tastefully contrast with the black leather and materials throughout the cabin. In the driver’s seat, I had a myriad of choices from which I could set the seat to make me supremely comfortable. The ergonomics of Audi’s seats mitigate the soreness and fatigue from driving, and the leather embraces you without feeling pulpy. Its steering wheel, leather-wrapped, feels sporty, and gripping it reminded me of the time I slipped on my baseball glove as a kid: it felt supple, natural, and functional – and I couldn’t wait to play.

I, quite frankly, love sitting behind the wheel of a Q3. It’s much more than a love of the design or the name recognition, and it transcends the marque. I love it because of the performance.

The ability an Audi has to make driving into art is uncanny. Audis are engineered and manufactured to perform on the road in a manner of which all competitors envy. That’s the mark of greatness – imitation, or at least attempted imitation – and Audi should feel pride. If Audi didn’t get it so right, some might be able to clamor about “hubris.”

There is no time to waste on humility.

In the driver’s seat, there is all of the garnishing that would compel anyone to drive: from the leather-wrapped steering wheel to the billiard ball gear shift, manipulating the controls and placing the Q3 into drive is a genuine event. I still had my foot on the brake with an idling engine gently purring its approval, and I couldn’t help but disrupt it with throaty growls of stationary acceleration.

Here is where you can enjoy a natural state of driving. Stop signs. Traffic lights. Other motorists. Consumers can acquire some perspective as to the feel for everyday use – a more standard lifestyle. At low speeds, the Q3 handles incredibly well, and despite the perceived heft of its frame, I easily managed to round bends and crest hills in a way that’s comparable to much smaller vehicles. The Q3 clung to the inside of my turns with unrivaled intensity and maintained a center of gravity that wavered not one bit. It constantly felt solid. Sturdy.

I also marveled at its responsiveness: quick and vigorous acceleration, as well as smooth deceleration. No driving experience has been so intuitive, and no other vehicle has been so synced with my movements behind the wheel. Never once did I feel slight hesitations; the Q3 maintained a great pace and reaction time.

As I approached the on-ramp for the highway, I noted a lack of rattling; in fact, I noted a lack of noise altogether. The Q3’s cabin was designed in such a manner as to eliminate road and engine sounds without removing a driver from the act of driving – without removing him or her from the road. I now understood how someone could view a vehicle as a sanctuary. And this was mine – for now.

Life Is a Highway, and I Want to Drive It All Night Long

The highway is where you can “open it up,” as I was once told – safely, of course. Let me say that there’s no lag nor hesitation nor lethargy to this pony’s gallop. As the engine cranked out greater horsepower, it unleashed an aggressive snarl that resonated through my hands and provided immediate gratification. I felt the steering tighten in a very smooth and meticulous manner. I stirred through congestion with terrific responsiveness and governed the route to the exact exit for today’s planned test drive. I may also have taken the liberty of an extra punch of acceleration just for the thrill of it… May have.

That Exit. That Glorious Exit.

Construction crews clearly built the exit – yes, THE exit – with the sole purpose in mind that people could test quattro. If you hold any doubt regarding Audi’s ingenius all-wheel drive system’s capabilities, then go now to Audi Cary. Stop reading. Go. As I accelerated and turned the wheel, the Q3 masterfully gripped to the road with great tenacity and not one bit of perceptible yaw. It was a demonstration of perfection.

The question mark denotes that I’m not sure how to conclude this test-drive review. Do I even want to conclude my experience with the 2015 Audi Q3? It was one of the few times that my experience in a crossover actually engaged me with enough substance and performance to want one. If you want to buy a brand for its marque, then there’s nothing I could say to stop you. If you want to buy a brand with a marque that means something – that has history – and a brand with a crossover that can perform as good as it looks, then I think we know what you want.